Can't think of a title today...

So effectively since the New Year, I've been working almost everyday, safe for the days I go back home to visit mum and dad. Its been tough, but I think I'm pulling through.

School's hectic as well, but fortunately I've worked a schedule around it and it seems to be working. :)

Heard some interesting rumours circulating about me, and I guess I should really put it out here first, but I don't wanna 'pecah lobang' on the article that will be out in TNP about it. Keep a lookout, and yes I will be putting up an official post regarding it after its out. *laughs* Its quite hilarious really!

Am currently shooting Enbloc, which is quite fantastic. Patrick Teoh (old family friend) plays my "Pa", Nat Ho is my younger brother, Darren Lim and Nick Shen are my older brothers, and Rebecca Lim (hottie!) is my sister in law! Its going to be a real drama-rama so you guys would wanna watch out for that in March. More info on the Mediacorp website, me thinks...

Oh, look what you've done, you've made a fool of everyone..

Woke up this morning feeling particularly dreary. (Aiyoh why my posts so depressing these days?! Sigh. Sorry ah. :P)

Last night I spent a coupla hours with Eugenie watching a Gladiator and then a really stupidly funny chick flick on HBO. We had our laughs and then she went home, and then... I was alone again. Well, not really, Skit and Demi were with me. I got ready for bed, (cleanse, exfoliate, tone, moisturise, nightcream. bleah.) and slipped under the covers. Skit tried to get into the bedroom (clawing at the door, that spoilt little kitty), so I let him in after 20 minutes. Then I just tossed and turned, and although I was exhausted I couldn't bring myself to fall asleep. Fine. So I got up, went to my fridge and pulled out my favourite bottle of red wine (its the only one that I drink), which is a Brown Brothers Shiraz, its a slightly effervescent sweet red wine. I sat at my computer desk and stared out into the night.

I've got work this morning till evening. Shooting a drama called Enbloc. Yesterday I was marinated in a tub of milk for a shoot! Lol. I love how I do something different everyday... but I'm realy tired, guys. I think all this rushing around, University and preperations... is leaving me with little time with myself lately. I know I said before that "Me" time is overrated, but.. I don't know. I'm not sure I know much anymore.

Oh bloody hell. Enough with wallowing in self pity or whatever it is that is making me feel this way. I'm flying home tonight to be with my family, (the ENTIRE family is back, Lucas included! YAY! I get to see my nephew! :D) and best of all, I'll get to sit down in front of the telly, pass my dad that tub of (now low fat, low cholesterol) icecream, and chill with him. He'll probably have gone out to buy durians for me too. *smiles*

Alrighty I've gotta run. Need to be at Holland in 30 minutes. Time to gulp down this now lukewarm coffee and start my day.

Big hugs to all of you for your prayers and well wishes. Thank you.

I know I share alot with you guys on this blog, I really feel like I've gotten to know (some) of you rather well even... I know somethings in life should be kept private (and I do maintain a high level of privacy inspite of this blog, as some of you would now come to realise), but I feel that hey, there is no harm in letting you guys know the following, and what's more I'd probably get a little more prayer towards the cause.

I recieved the news at about 3pm on Saturday. Dad called me up to say that after my nagging, he finally went to the cardiac doctor and got his heart checked out. He's been having miss-beats regularly, and sometimes felt uncomfortable. They found four clogged arteries, one of which is severely blocked. Needless to say that the photoshoot I had to go for the new drama I'm shooting, Enbloc, involved a rather puffy-eyed Andrea.

That night I had to shoot CarrotCake, so I could only fly back then the scene wrapped, which was at about 8am. Packed up, went home, managed to spend some time with my now 69 year old father. My mother kept telling me to be strong and brave for him, so he never saw me shed a tear or rack a sob. I'm his "little girl", you see, and it'd break his heart to see me cry... all I could bring myself to say was, "I love you daddy. It's gonna be fine, I know it."

He checked into the National Heart Centre in KL on the night of Sunday, and we returned Monday morning as he was all scrubbed up to have an Angioplasty. Failure of that procedure would mean he'd need to go in for a bypass (open heart surgery). I've never seen my father sick before, so seeing his grey hairs tucked under a paper shower-cap, with a blanket pulled up to his chin just broke my heart. I realised that he's not so young anymore, and this could well be the last time I saw my dad. He was so brave for us as well, and I immediately had flashbacks of how he used to pick me up from school, how he got mad when I flicked water on his spectacles (but not really la), how he used to sit me down on his knee when I was still little enough for him to hold my weight. I used to drive with him to go "durian hunting"... I only allowed myself to cry after we all said "Okay la! I'll see you soon! :D" to him, to keep him brave.

The surgery took longer than expected. We overheard nurses apologising to other patients waiting to go into surgery that the current case (my dad) had some "complications". My mother's eyes widened and she had to try very hard to keep it together.

An hour and a half later than expected, my daddy came out of the operation room. His skin still looked good, which means he didn't loose much blood. But an Angioplasty doesn't involve alot of bloodloss anyway. We findout later that he had a clot that was a little tricky, so they took a while to get it sorted.... but they did in the end. Dad spent a night under observation (heavily protesting, of course. Doctors make the worst patients. lol), and I had to fly back at 5pm for another shoot of Carrotcake (which was last night) which meant that I had to work till 7am following all the hospital drama.

But who cares really. I'd readily stay awake for three days, weeks, months or years if it meant that I'd be able to be with my dad a little bit longer. I felt so bad having to leave him yesterday while he was still recuperating, but I explained that I had to as if I didn't shoot it today, I'd have to do it in a week's time anyway - which would interrupt my wanting to go home then to see how he's doing.

Work is really unforgiving, I am close to telling everyone to shove it as I need to have space for myself and to travel back home... but contracts have been signed, dates have been fixed, and it'll be immensely selfish of me to interrupt the lives of other (actors) for my own needs right now. All I can do tonight before I close my eyes (at 1opm, for a change!!), is say a small prayer for my dad, to thank God for making everything move so smoothly for him. I'll probably get through this month a little more tired than usual, but I guess its a price I gotta pay for choosing to do what I do. My sisters are flying back from London and Perth this weekend, I'd love to be there but will only be able to get in on the 11th evening and will need to fly out on the early morning of the 14th (Last day of shoot for CarrotCake on the 14th at 10am.)

So, yes. Things are somewhat sorted now, not to worry. But I will be a little too busy to blog much over the next few weeks, thank you for understanding, dear readers. This post has actually been therapeutic for me to type actually. lol.
Posted by Andrea Fonseka at 3:51 PM 17 comments:

Okay so we've been shooting a coupla days now for the upcoming movie Carrotcake Conversations... and I can say a few things about my experience so far:

1. Adrian Pang and Alaric Tay are amazing actors.
2. Shooting in hawker centres is really difficult (noise pollution!).
3. I'm getting little to no sleep (think shooting from 9pm to 9am, then having a photoshoot to go for at 3.30pm that same day!! That's what I gotta go through today! :().
4. My character is alot of fun to play.
5. Michael Wang and the entire team working on set are extreeemely patient and professional.

Okay so I'm halfway through the shooting now, only about a week more to go nocturnal before its a wrap and school starts. (!!!) The year has barely begun and already I'm in need of another holiday. Lol.

Anyway on to more pressing details. I have come across a case of a cat that needs to be adopted. If any of you, or if you know of anyone who would like a new addition to the family, please email Magdalene Lim at play_inc@hotmail.com. Info on the cat:

The vet estimated she's about 5 years old. She lived as a stray until she was taken in. She was diagnosed with a liver problem, but I can assure you alot of pets actually have this as their diets aren't exactly healthy. She got hospitalized for a while, but the vet discharged her because she has fully recovered. No fleas nor ringworm. She is remarkably trusting with human beings. She allows herself to be carried, very affectionate, and litter trained. Its really rare to find such a pretty, loving little cat. She just needs someone who'll love her despite her condition, and watch out for any relapse (my worry). She's ginger all over, sterilized, and has a clipped ear.

Here are some pictures, I really hope any of you can help. I would love to take her in but unfortunately my two cats haven't responded well to newcomers and I fear for her safety should I bring her into my home. (Skit's pretty big and fierce.) 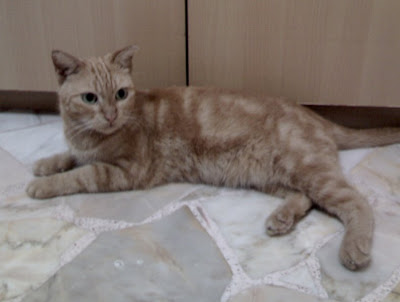 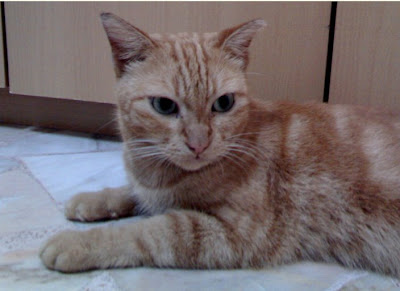