Last night I went to watch Maroon 5 perform at the Singapore Indoor Stadium. A few observations:

1. Frontman's voice is really good.
2. They're all really good musicians...but
3. THE DRUMMER STOLE THE SHOW MAN!!! He was really really good. :D

It was a fairly good performance, they were really rocking out on stage, but unfortunately my ticket seats were a tad too far away to feel the vibe. But was still pretty good-lah, inspite of the show lasting just over an hour and it took me almost as long to catch a cab home and the hotdog I ate didn't agree with me!! :(

I love watching live acts perform. I think that there's such an element of... energy to it, y'know? That's why when I have the occassional night out I like going to pubs with good bands playing.

Anyhoo on to other things.. I just wrapped EnBloc. Now I have to concentrate on my finals. Gonna graduate in May, baby! I will be really slogging it out in the following weeks, with four papers due in three weeks. EEeep! Wish me luck, y'all.

Oh but will be attending a few shows at the upcoming Singapore Fashion Festival.... :) So will start on Uni work tonight. ;(
Posted by Andrea Fonseka at 11:06 AM 8 comments:

Just a quick post to invite everyone to my facebook profile. You will find a bunch of pictures there, including some behind the scenes pictures of Carrotcake Conversations.
Posted by Andrea Fonseka at 1:28 PM 2 comments: 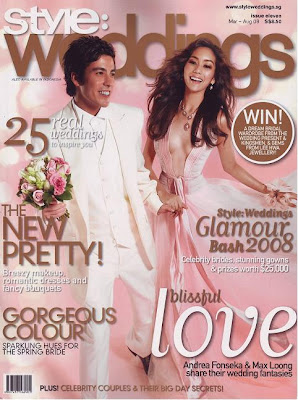 I saw the sun! And it openened up my eyes...

After a few days of rain, finally it looks like the cloud has parted and we got some B-E-A-U-tiful rays today! :D Lets just hope God doesn't snap his fingers and make it rain suddenly today-lah. ;)

Feeling really optimistic today. Surprising for a Monday but methinks its 'cause I don't have that much work to do today (aside from running errands). Heh.

I attended the Viewer's Choice Awards last week, and the best Ad goes to "Dei, Mumbai Lah!" by M1. Close second came "Anything, Whatever" kedai runcit ad. Both were great. Also met some interesting people that night, it was good fun.

Okay so lets spread the optimism, shall we?

You know, inspite of all of the complainin' and stuff we make, Singapore's a bloody great country to live in. Okay so we have a Class 1 terrorist on the loose, but he's being a good boy and not causing much trouble aside from causeway jams... so we can put the issue of Mat Selamat to the sidelines for now.

Think about it - the country is relatively safe (compared to many other countries/cities), its clean, and even after the price hike, taxis are affordable. Public transportation system is top-notch, people are generally friendly, and the weather is still better than most najor cities in the world (i.e London). Hard work is rewarded, and we've one of the strongest currencies in the region which equates to GREAT SHOPPING ABROAD! Great nightlife. The economy is doing relatively well, and there is a low poverty rate. Traffic jams are still better than other cities in the region, (try travelling in KL during rush hour - 3 hours on the same road, man), and lots of international acts drop by.

Speaking about life; someone asked me the other day, what I wanted in it. I thought for two seconds and just say, "I want to be happy." Simple, no?

Yeah, being in the industry is great, I love my job. But essesntially, I want to be HAPPY. And it may not be my job, it may not be money... its that thing you think of, if you should face your moment of reckoning, that you love the most. If your plane is gonna crash/ship is gonna sink/office chair is gonna explode... what would be the first thing that pops into your mind that you wish you spent more energy on? That's what makes you happy, luv, and that's what you should invest most of your energy into, to be happy. That's my current formula anyways. Keeps things in perspective.

Well, I hope everyone else is having a great day as well. If not, go do something that would make you happy. Heck, buy a chocolate easter bunny and bite of its head if that's your kinda thing. *big big grin*
Posted by Andrea Fonseka at 10:14 AM 5 comments:

Now that your rose is in bloom, A light hits the moon on the grave...

Last night we shot some finals scenes for Enbloc (8pm every Wed! ;) ) and while I can't give too much away, I have to say that Cindy, my character, goes through lots of ups and downs. Last night was one of my downs. Which brings me to this question.

Sometimes in life you meet people, whom you connect amazingly with, that you wonder what it'll be like to be with that person... and he or she ends up to be either in a relationship, or worse, married. Actually, I won't explore the married option, because that one's really off limits. heh. A more controversial question would be the other one. I guess there are a few options;

1. Try to steal he/she away from her partner
Personally I believe in karma, that is what goes around, comes around. If you steal her away from her partner, there'sa high chance that it'll happen to you. Not just because of Karma, but hey - if she can leave her man for you, she sure a hell would be able to leave you for another man. So tread carefully on this turf. Playing devil's advocate though - and this is a true story - the lady ended up leaving her fiancee for the guy, and they ended up happily married. So how? Its still a risk to take this path, because if she decides not to leave her man, your relationship with her would be ruined forever. She wouldn't respect what you tried to do (especially if you were manipulative), and you possible may have lost respect for her in the process as well (for cheating on her partner). So there is a high chance of this one not working out.

2. Be 'friends'
Almost like option (1), but not really. Whilst you make it clear to her that you have feelings for her, and you'd be the best man in the world for her, refuse to do anything with her while she's in a relationship. She would probably admire your 'principles' (or not, pending on how you handle it), and you may or may not get results. Point is, ball is in her court, and its she who decides what she wants to do. Make it clear though, that being the third wheel is not an option for you. Whilst very easy to initially do, this option becomes complicated if emotions are thrown in the air and treads on option (1) above. Amazing amount of willpower is required is to carry this option out.

3. Quietly sit in a corner and wait
Establish a good enough relationship so much so that you guys go out occassionally enough to 'kinda' know of her lovelife situation. Better yet, befriend her best friend (and hopefully she has a loose tongue). Then wait for her relationship to fall apart, and STRIKE! while the iron is hot. Heh. Sounds easy enough, and it can possibly be so if your timing is good enough, but danger lurks where she's having a fantastic relationship with her (blasted) fella, and you end up waiting for about 3-7 years before she decides to marry the dude and have little mini-hers running around. So whilst this option may not guaruntee results... it is possibly the safest. I mean, if its meant to be, its meant to be.. (another life-principle I believe in), and depending on your own principles, you could possibly even date other people while you're waiting around (though this is tricky as well, 'cause then you end up using someone else to pass time). But I'm not here to judge you, and to be honest - whatever floats your boat, right?

4. Burn it
Totally not have anything to do with her, 'cause you're not that sorta person to break a relationship up. Slightly less pro-active than option (3), but still, it really ain't a bad idea, at the end of the day. There are LOTS of fish in the sea. Trust me, you'd find someone else as good / better than that person that you think is the special one. Stop wanting what you can't have, and move on. With some luck, she'll realise what she let go, and chase after you instead. ;)
Posted by Andrea Fonseka at 9:18 AM 19 comments:

Mediacorp Video.... Watch me talk about my character, Cindy 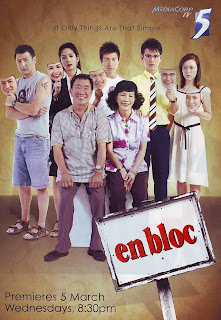 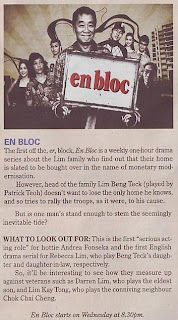 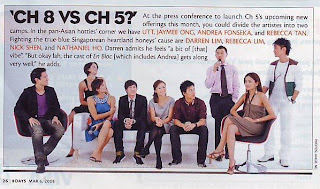 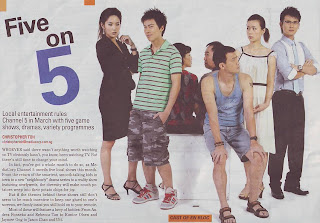 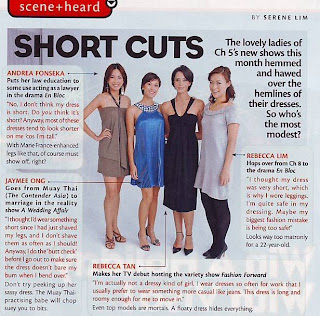