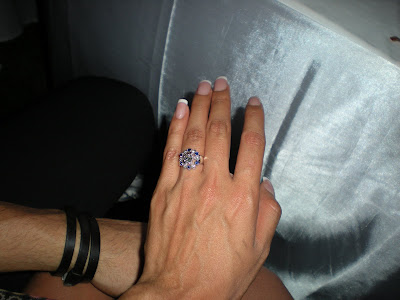 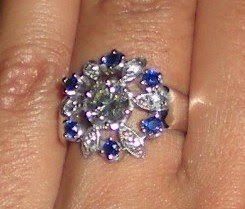 Its a diamond center, with six petals, each with its own little diamond in it, surrounded by beautiful sapphires!
If you're wondering why its not the 'conventional' diamond solitaire engagement ring - well - its because that ring was given to him by his mother. Its his great-great-grandmother's engagement ring!! At 101 years old, you can't get rings in the same (hand)cut stones anymore! And each petal actually has decorative engravings on it! Its pretty damn heavy on my finger, not because the ring itself is pretty solid, but due to the gravity of the situation should I lose it!! *gulp*

But its still really sweet, and such an honour to have the family heirloom. I'm a pretty lucky girl. ;)

As for the hotel ballroom shopping, I have to say... I've been to a few now, and whilst I have never noticed it before.. is it me or do hotels have the WORST carpeting in their ballrooms?!? Who said it was a good idea to have gold + blue + red/maroon?? TOGETHER??

Carpeting aside, I am pretty happy with the progress so far. I have narrowed it down to two, with the option of viewing more in the coming month, cause... Paul's coming to visit!! :D He'll be with me for two weeks (*joy!*) and we're going to be doing some sightseeing around KL and Ipoh. All this while he's not been in KL for more than a weekend, so its really nice to have him for 14 days.. albeit me having to work at the Malaysian International Fashion Week Galas everynight from the 4th to the 8th Nov! But not to worry, the event is sponsored by Chivas! Paul loves Chivas! I reckon he'll be having more fun at the parties than me. ;)

I am so excited, things with MIFA and MIFW are really moving along at breakneck speed! Its going to be SUCH a blast! Make sure you come down to the Pavillion KL for the fashion week - don't miss out!
Oh! AaaAnd I am so happy I've got the most amazing wedding planners ever!!! :D
Next post: My wedding planners! (Putting your pictures up here, Angela and Team - so, no pressure! hehe! ;) )
Posted by Andrea Fonseka at 11:17 PM

the ring is beautiful!

don't forget to snap the details that you love the most (or hate the most) about each ballroom so it'll make it easier for you to decide and for the planners to emphasize (or hide, if it's a detail you hate)

the best part is yet to come... wedding dress shopping! (: