Vanessa Charlton sang this one, beautiful song.. I especially like the piano bits in them. ;)

Anyway, just to let you guys know, family time is going really great. My daddy has cheered up tremendously since all of us daughters have come home, infact, today's his Birthday... and I'd like to dedicate this song to my father. His daughters would happily fly a thousand miles to be with him on his special day. HAPPY 70TH BIRTHDAY DADDY! LOVE YOU SO MUCH! :)

Alrighty then, lets get on to a serious post as to what's happening these days. Haven't had one of these in a while!

1. I will be flying to L.A *again*!! This time to interview the cast and crew of an upcomming new movie. I don't think I can speak of it yet, you guys will have to catch the preview on Ch. 5, Mediacorp. ;) Will give you guys a few hints though: Its a HUGE HUGE blockbuster, it stars just ONE MAN, the movie before this was the BEGINNING of the story, and it involved cards and cars. The movie is also based on a book, written by an Englishman (many books, many of which have been produced into movies over the past few decades, starring different men as the lead). And, it was a gig that I was fankly, extremely keen to do, for many obvious reasons. Any guesses?? ;)

2. Carrotcake Conversations is out on the 13th of November! The Premier will be on the 5th of November, at a Golden Village Cinema. When I get more details I'll let you guys know about it. We can probably have a proper meet and greet session there. :) Anyone up for that?

3. I will be in the coming issue First magazine, the movie mag, in conjunction with Carrotcake Conversation's debut,

4. I will be in 8 Days again pretty soon in the coming weeks.

5. I will be in One Utama Shopping Centre, KL, for a Marie France Roadshow - Any Malaysians reading this? ;) That'll be on the 18th of Oct.

6. Doing another branding shoot for Channel 5 to be aired in time to come. :)

So my month of October is pretty much packed... Going from KL-Sing-KL-Sing-LA-Sing! I'm going to be one tired bunny at the end of the month... Also in November I have a friend's wedding to attend in Phuket! How exciting, I've never really been. Any tips for a week in Phuket? :) Not to worry, will take many nice pictures. Need to buy a new camera charger though, can't seem to find mine.. sigh. Matters not though, thanks to my sister, Lena, I still managed to get a hold of some pics. Here's a family one. :) 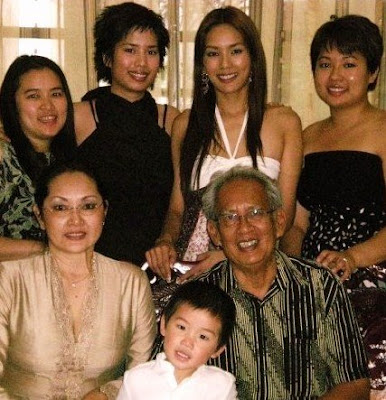 those hints are too obvious! :D
(though it doesn't exactly star just one man)

so as not to spoil the fun for the others, let us know if you do tower over Daniel Craig ;-)

i cant wait to catch you in carrotcake conversations!

Cards and cars? Should read martini's and babes with saucy names, no? Haha!

I love Daniel Craig! Say hello him for me! And thanks for coming to our cooking studio the other day. I heard you were there recently with Tay Ping Hui for a photoshoot late late in the evening. Sorry I was not there to meet you as I was visiting Andrea in HK.

And Andrea Monni says hi to you too. Remember the dating thing that you did a few years back?