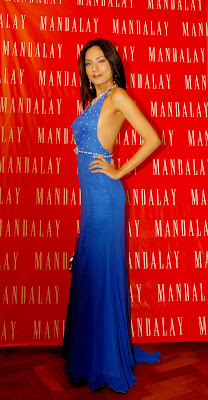 Yep. Remember the function I went to that I said the pics would come in a month? Yes..it was *this* dress I experienced a Janet Jackson moment in... lol.

Yam-Seng-ing at the Dinner, to Mr. and Mrs. Sin's 16th year anniversary.

Anita Sarawak was the host for the night, we were all clearly entertained..

Stepped outside for a breather, only to take pictures with Mr. Lewre, and my AWESOME designer Mr. Jovian Mandagie (who also designed the other dress in this picture)

More Pictures! This time with Lina Onn, Malaysia's top Radio DJ. Talk about girl power, man.. she's won the awards like 8 times in a row or something crazy like that.

Candid shot. I'm happy my arms were positioned where they are.. 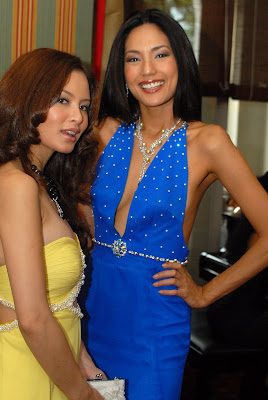 Myself and Yummy Mummy-to-be Daphne Iking.

Again, very aptly placed Red Table Ornament makes this picture post-able... ;)
Well, that's it for now really. Hope you guys enjoy these pictures, cause they were such a pain in the neck to load up!!! ;)
Posted by Andrea Fonseka at 7:30 PM

Gorgeous pictures as always.. as was looking for your janet jackson moment.. hehe.. j/k.. didn't your back hurt from keeping a straight back all night because of the dress?

really nice photos you uploaded.hahas.looks like you enjoyed yourself v. much that night.hehe:)

Miko: Yes, actually it was. :P

Any pictures of Siti Nurhaliza?

The way you describe your hands and Red Table Ornament, just the the show Austin Power where everything is stragically place. hahahaha.

Dear, I am speechless everytime you place your pics, Stare until my mouth open so big :O lucky the tissue beside my computer. Joking la.

Honestly Andrea, you very Chantek la:P...well, no words can describe you la..

Linda Ong does look like an Alpha woman. Cool:P

PS: Wonder where are Faz and choc? hmm

Btw Andrea, how often do you go back to KL to see your parents? and do you miss all your dogs? I guess you miss all of them badly:(

everyone's nose is bleeding now,i think gabe need to cool down a bit,he had a high fever after seeing all these hot pictures.

To make up for the "scene glean" yesterday, I thought I'd write you some REAL poetry tonight... :)

gosh, you look FAB! i love the dress!

hi gabe,
MIA cos i've been busy playing GE with my boyfriend for the past week lah =)

Thanks for the pics, and congrats on the contract. :)

Not only high fever, I have breakout on my face too hahahahaha.
Joking la,

But honestly, She is even more beautiful on the inside..Thats what make her so admired...High Five to Andrea..

Better sleep early, if not gotto to say good bye to the good night and panda eyes tommorrow. So will look preety for tomorrow. Right PF?
Nice!

You hold my breathe at hello. Can't stop looking at you now.. haha..

A match in heaven.. Andrea & the dress of heaven.

Gabe, you're right. She's perfect. =)
Hope you had an unforgetable night.

Scorpion: you talked about the food ..Yap noticed that too (only now). No food, but realised that the table are filled with utensils and lots of red packaging mineral water. Why ah?

Andrea, don't you guys eat something there?

Anyway, no one will notice whether the table got food a not, once you look at the pics. With Andrea's healthy and golden brown skin tone matching with the uniquely blue Don't even mention her face).....Woo la la.(cheerky Grin) PERFECT:P

Jeff: Truely HEAVEN; Now I can imagine what Heaven is like :)

Andrea and all, Have a pretty and bright day ahead k :D

Chantek means beautiful in Malay...:) But not too sure the right spelling in Malay.

Andrea, Do you speak Mandarin?

Saw the article on you and Sharon Au on 8 days.

I must admit that Sharon Au is very talented. However, I totally agreed what 8 days has said about you; taller, curvier, speak impeccable Queens English, Sweeter, natural, prettier, caring, imaginative, creative, friendlier, gullible, cheerful, energentic, gentle, funnier, charismatic, generous, loyal, eloquent, gracious, grateful, loving, strict (to her dogs and boyfriend hahaha), on and on and on...:) Wait a minute..did 8 days write so much??? hmm

Enough Gabe, you talk too much again hee hee :i

Hope you have a wonderful day. Its cooling out there. Go have a slow walk before you sleep k:)

GH, did you say A has a boyfriend?

A said before she is very single now, But when the right one comes along, then she may consider. She wants to concentrate on what she is doing now and no time for boyfriend. I joking meant she will train her boyfriend like her dogs la:)

If Andrea has a boyfriend, trust her decision k. She will have all our blessing:)

Anyway better sleep, if not I can say good bye to my good night:)

LOL!
Yes its true (kinda) that I was joking when I said I'd train my boyfriends like I do my dogs... but in a way they are kind of the same too.

With my dogs I use 'positive reinforcement' which means that when they do something good, I PRAISE and PRAISE alot.. when they do something bad, I wont hit them or anything - I just do nothing. Dogs by nature want to please, so they will just end up doing more things that I will praise them for. Men (in general) are the same. ;)

As for the food: sorry la. It was such a high-fashion event it'd be really un-glam of me to keep taking pictures...so I didn't bring along my camera. All those pics here were taken by the inhouse photographer.

And yes, I do miss my dogs and my family.. that's why I'm going home for the weekend! :)

Enjoy your trip back home this wkends and come back safetly.

i'm back. andrea...the 5th pic is BEAUTIFUL...just curious, isn't it tiring to keep you posture so upright the whole night?I could never keep it up..like halfway through the night i'll probably start slouching.haha...ok so I'm not classy =(

Andrea, is Gabe like your PR person? He knows everything about you and answers all enquiries posted directed at you...even how to lose weight..which I thought was very funny. Anyway chocminttruffle..wah, you play games with you bf for a week?! so happening. i won't even understand those games.

I was shopping at VivoCity and as i was shopping...guess who i saw!i saw a very beautiful girl,who's picture was very big.It was you!Andrea Fonseka!!!WOW!i didnt know you endorsed for Chomel and Even Madame Butterfly.COOL~

p.s:great that u going home this weekend!Ypu deserve a break girl!


signing off for now,

"when they do something bad...I just do nothing"

GH, I guess I SHOULD have been writing poetry for YOU after all. :)

hi faezah,he taught me how to play lah.games can be a little intimidating at first...u should try with ur bf too.makes for hours of fun! =)
(sorry Andrea, taking up unnecessary comment space here) =X

Andrea, now the $250,000 question. wld you give any of these guys who visit your blog religiously a chance to know you personally? you might find your king :)*wink

Mav: That would be an 'expensive' question now wouldn't it. I'll definitely have to arrange something sooner or later.. but not just yet. ;)
The wardrobe malfunction happened when there was no cameras around, and thankfully the only one to have caught it was a lady sitting next to me. And my designer. Who accidently let it slip while he was adjusting it around my neck. :)