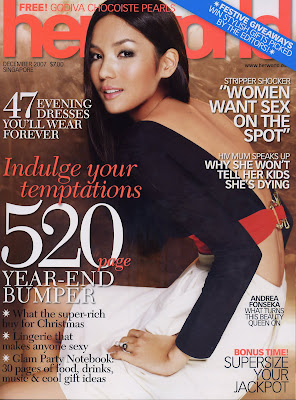 The Unbearable Lightness of Being

I was speaking to a friend and it made me remember this book, written by Milan Kundera. Its an absolutely fantastic read.. I couldn't find my old copy, so I went out and bought a new one.

Re-reading is a beautiful thing. Like watching a delicate movie over again, you tend to notice things that you didn't before.

The book tells a story of two lovers, Tomas and Tereza, as well as that of Sabina and Franz. Tomas, who has had a failed marriage, falls in love with Tereza. Their lives were brought together by little happenings of fate (you know, those little unexplainable things), but also raises the question as to how much we play a part in determining our future. Tomas, a womanizer by disease, can't stop his old lifestyle, and Tereza s driven quite mad by it. But at the end we realise that in spite of his ways, Tomas was bent and broken by the will of Tereza's submissive force.

One of Tomas' mistresses, Sabina, also had a relationship with Franz, a married scholar. Tomas and Franz are very different, and the latter is deeply in love with Sabina, whereas the former looks at her more as a friend. Franz's wife is a terror, and he only realises it much later on - which plays on the theme of how sometimes we overlook things when its easier to do so. He eventually divorces his wife for Sabina, but Sabina, sensing that this relationship is not right for her (deep down inside she loves Tomas), flees the country. And Franz goes a little mad, attributing everything in life (even his new girlfriend!) as a sign of faithfulness to Sabina. But eventually he snaps out of it, but dies in the end tragically.

What's great about this book is that its full of amazing 'one-liners' that you won't be able to find elsewhere. Some of my favourites:

"The heavier the burden, the closer our lives come to the earth, the more real and truthful they become."

"Any schoolboy can do experiements in the physics laboratory to test various scientific hypotheses. But man, because he has only one life to live, cannot conduct experiments to test whether to follow his passion or not."

"But when the strong were too weak to leave the weak, the weak had to be strong enough to leave."

"Love begins at the point when a woman enters her first word into out poetic memory."

"Characters are not born, like people, of woman; they are born of a situation, a sentence, a metaphor containing in a nutshell a basic human possibility that the author thinks no one else has discovered or said something essential about."

And my utmost favourite:

" Perhaps all the questions we ask of love, to measure, test, probe and save it, have the additional effect of cutting it short. Perhaps the reason we are unable to love is that we yearn to be loved, that is, we demand something (love) from our partner instead of delivering ourselves up to him demand free and asking for nothing in return but his company."

Hmm .. I wonder if reading a really dark romantic novel has anything to do with my mood lately. *lol*
Posted by Andrea Fonseka at 10:50 AM 7 comments:

All we need is love

Recently I've been bogged down with an insane amount of work, and family commitments. I went to KL over the weekend for a Dog Show with my dad, (it was good to see him, missed him loads), and had to do several shoots and events over last week. Its been pretty tiring, but fulfilling of course.

Sometimes I think I'm blessed to be too busy to stop and breathe, and think. Lol. I say that with reflection over predicaments that can often surface due to 'too much thinking'. Yknowhatimean?

Love problems, things with friendships going awry, arguments, nitpicking.... all that really only happens when you allow yourself to be sucked in by it. And you only get sucked in if you have enough time to bother. A couple of my friends are going through some stuff, and I realise that sometimes, as per title of this entry, "All We Need Is Love".

That's what alot of us are looking for, right? The difference between good relationships and bad ones, is whether the concept of 'love' meets our expectations.

A friend of mine mentioned recently; "The idea of love is easy to enjoy. The problem is the execution of this emotion." (Or something like that). So true, innit? Two people may truly, really love each other... but if they don't know how to show it, or if one or both of them make bad judgement calls... it really can end what could be a potentially amazing relationship. Similarly, two people may not "love" one another with deeply or passionately, but if they have ample respect, trust and patience, they may ultimately have a more stable, fulfilling relationship than the former example.

Still, I don't know which relationship I'd rather have - one with moments of brilliance, or one with a steady pulse rate. I guess that just shows my immaturity in this minefield of emotions.
Posted by Andrea Fonseka at 9:28 PM 20 comments:

A little bit of conversation, a little more action

Don't ask me why I'm pasting lyrics as the titles, I just thought it was apt. :P

Okiedokie, Eugenie came and went. Unfortunately my lovely digital camera passed away at the same time, so I wasn't able to take any pictures. However, go to her website, and you'll see my darling who has been by me ever so often especially in the past coupla years. She's seriously one of the most amazing people in the world, and is such an inspiration to me.

Well, its going to be the start of yet another week. This weekend was a funny one 'caus of Deepavali on Thurs (Happy Deepavali to all btw!), and so the weekend started kinda early for me. Heh. It was a nice feeling, but weird 'cause on Friday it felt like it was Sunday. Now its Sunday and it just feels.. .weird. :S

It was also a teary weekend for me, as I stayed in and watched old reruns on HBO. I caught Castaway last night, and was sobbing at several stages... and Joy Luck Club (one of my all time favourites) this afternoon, and seriously no character in the movie stops crying either. Problem with emotional movies, and me watching them; I always put myself in the situation that the character is going through, or imagine if that had happened to me, on a first or second hand basis... so yes. I wailed in the cinema when I watched City of Angels too. Heh... and I get really depressed after watching Grey's Anatomy. It takes me a while before I recover even....

....Yep. My sister was right all along. I'm a crazy little basket case.
Posted by Andrea Fonseka at 3:24 PM 7 comments:

Its just another Manic Monday

..Wish it was Sunday. Lol.
Yep, I've submitted YET ANOTHER RESEARCH PAPER over the weekend. I really think I'm getting good at this; research doesn't seem to difficult anymore. Topic of the week? Islamic Law and Human Rights. Really quite interesting, if you ask me (maybe that's why I *almost* enjoyed writing the paper).
So its officially Monday, I've got an event to host this evening. And another one tomorrow, and another on Wednesday. I'm excited about Wednesday's Lee Hwa shoot, as a darling friend of mine, Eugenie Chan, will be flying in for it. She and I have been friends since.. wow since we were 13, so that would be 10 years of knowing her! Lol. Its going to be a wonderful week, I can feel it. She's staying till Friday as well, so it'll be so nice to have someone around the apartment to entertain me, at least Skit and Demi will have a break! ;)
Alrighty then, as promised, pictures from the Halloween party! :D 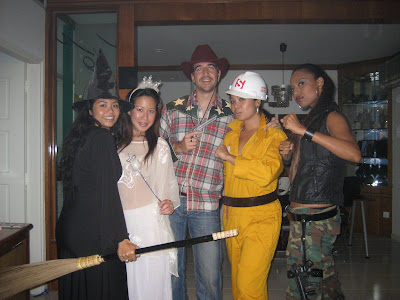 Halloween get-up at my place, I was holding the camera so I wasn't in it. heh. 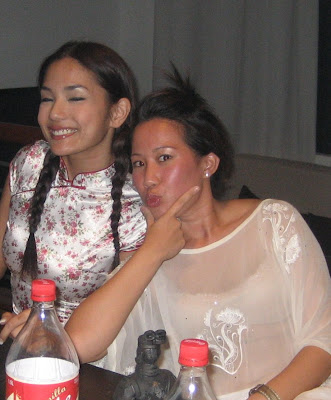 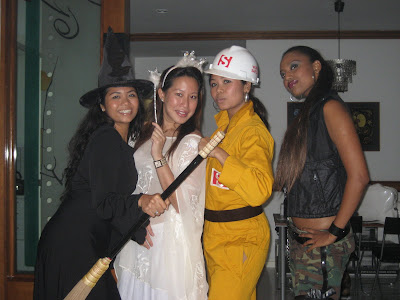 Just the girls this time, aren't they an awesome bunch? Sorry, they're all taken, fellas...

We headed over to St James Powerstation for a really great time. Much thanks to Cheryl! 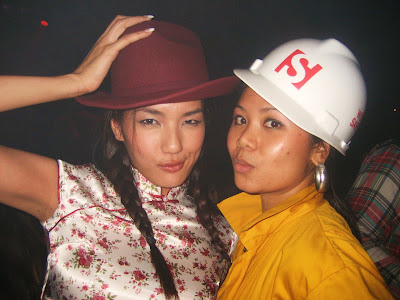 Had to wear the hat. Just had to. 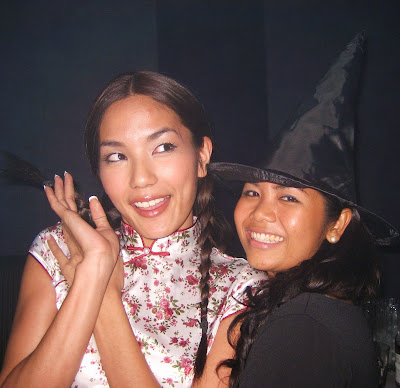 Posted by Andrea Fonseka at 2:54 AM 9 comments:

Okay so after the finals of Live the Dream, I decided to take a nice real break, which explains my sudden disappearance. Sorry-ah. ;)

Anyway I know its a little late for that now, but Congratulations to Fendi and By Def, for clinching the top spot, and to Victor and Cats, well done on a commendable job. Cheers all round.

Speaking of 'cheers'-ing, after the Finale, all of us decided to hop down to Wisma Atria, and we had a fantastic time. We were sweaty, make up was streaked, but what the hey! It was good fun. ;)

Grrr... I'm trying to upload pictures now and blogger is being a pain.

Anyhoo whilst we wait, lets talk on other fronts shall we.

Ah yes. This halloween, I did dress up, as an Oriental Dorethy. Yep, I was too lazy to go out shopping, so I put on my most modest "village girl" cheongsam, and tied two pleats. and wore red shoes and I was done! I'm still waiting for the pictures to be sent to me, so you'll have to watch this space for it.

And I know I said I took a break, but seriously there's never a complete break for me.. heh. I still had some work to do, went to a couple of events; Coach had a really fantastic fall winter line-up, I did a shoot for Urban which will be out 15th Nov, the Her World cover I did some time bacl will be out around the same time, and oh oh! I'm really excited about two more upcoming shoots, one for Style Bridal (I'm gonna be Utt's 'wife' on the cover! lol), and one more for Maxim, which will be out in Feb 2008. How I'm going to top the FHM shoot I did earlier this year.. I don't know. Lol.

Okay so something is very wrong with Blogger, will have to upload pictures another time.

Before I sign off, I'd like to wish my sister, Lena Fonseka, a very happy 26th Birthday. She was born on the 31st of October, and she's been a tremendous friend and a fantastic sister to me throughout my teens (God knows I was a terror!). She's in Perth at the moment, I do miss her. She was the first person I ran to when I went through a rough patch about two years ago, and I know she'll always be there for me if I should need her. What more can a younger sister ask for? :) Love you Lena, thank you for being the amazing person you are.

Unfortunately all my pics of her are in my old laptop, which I really should transfer over soon I know.. sorry. Procrastinator's bone in me. ;D
Posted by Andrea Fonseka at 10:10 AM 12 comments: