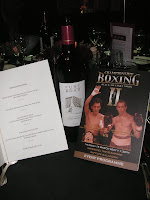 I watched my first boxing match last night. I must say, being a fan of watching a good fight on TV - watching it live is just so much better.

I arrived at the Swissotel (the one @ Raffles) in a glam taxi (one of them pretty ones, silver. Not the Merc, the other one) I was lucky enough to hail at 7pm. By the time I got there, the Ballroom foyer was already full of guests dressed up to the Nines. It was lovely to see attend a function in Singapore where everyone was all glammed up for a change.

I wore a black, halter top dress that was all flowy at the bottom. ;)

I met up with David, the FHM Gamer Girl and the Unofficial FHM Party girl. Don't I look like the sore thumb here... heh. 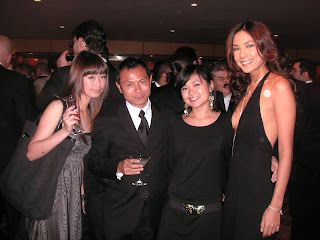 I also had the fortune to meet the Girl Next Door Finalists. 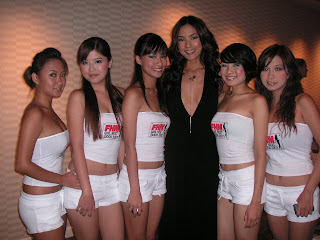 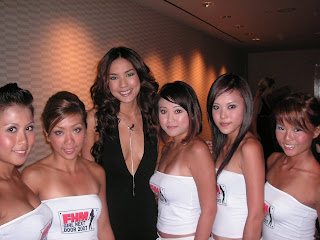 They were such lovely young little things. The finals are next Saturday, the 24th of March at Cafe Del Mar. Good luck to all of them!

Charlie Webster was the host of the night. 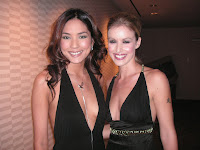 So we went in. The ring was in the middle of the ballroom, and the dinner was amazing. We had lobster as the apetiser, followed by really yummy veal and chocolate mouse for desert. Crab dumpling soup and lime sherbert in the middle. Come to think of it, the food may not have been that great. I could have just been really hungry (dinner was served only at 9pm. Being the Kampung girl that I am, I usually have mine at 6pm. *blush*)

I didn't take any pictures of the food unfortunately, this was taken while we were waiting to be served. I was thinking about it though, but decided to dig in instead. *heh*. Was WAAAY to hungry to take the camera out and for a snap.

There were a few smaller fights before the big one. The main matchup was between Daudy Bahari (Ind) (PABA Super Lightweight Champ), and John Cotterill Jr. (Aust)(PABA Interim Champ). 12 Rounds. It was a fantastic match. Although Daudy the BaliBoy won in the end, I must say The Man From Down Under gave us all a run for his money. 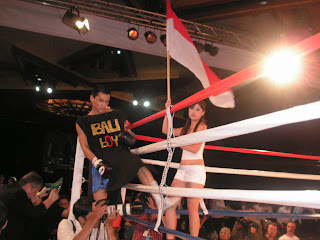 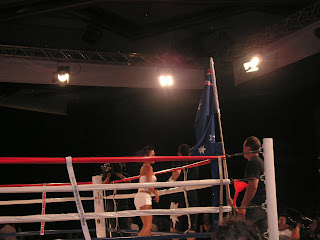 The two fighters entering the ring...
Shortly after that my digicam died on me. *grumble*. Managed to only get a few videos more, but that was basically it.
I left shortly after the fight, as it was late. Wish I had time to stay for the Auction, the proceeds went to charity... but alas. Andrea Fonseka was really tired, and my contact lens were killing me! I did meet some lovely people from Team FHM, and a lovely young lady uniquely named Valencia. Big Thanks to David for inviting me for this event. Cheers, mate! 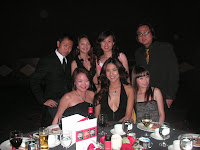 I dun like violence. I dun get boxing. How 2 people can fight each other over nothing but a medal? - Beats me!