Yesterday I went to the Asian FHM Editor's Conference at the Hyatt to meet the men behind the Best Selling Men's Magazine in the region. David, the editor of FHM Singapore graciously invited me to hand out autographed copies of the current issue of the magazine, and to lighten up the mood of this apparently serious conference (honestly though, how serious can it be? its FHM, not Newsweek!). 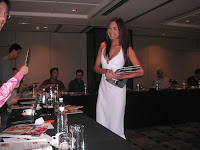 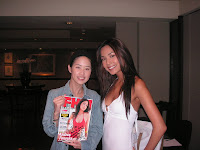 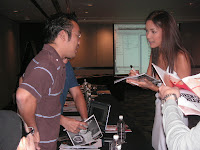 It was really great, meeting the minds behind FHM Thailand, Philippines, Taiwan... and it was refreshing to meet some women working for this predominantly male-run-for-male-fun magazine.

The photos from the shoot with FHM turned out great, I'm not going to post them up here, you should go get a copy of it and see for yourself! ;)

It was only yesterday that I took taxis around for the entire day, as I had to, dressed the way I was. *heh*. I'll write more on my environment friendly public transport in another post, but in brief lets just say that Andrea is now a pro Buses & MRT girl.

Oh, and Big News! I signed with Global Home Entertainment yesterday! Big hugs to Mel and Richmond for welcoming me with such warmth into this tight-knit artiste family.

So yes. 2007 looks like its set to be a big year for me. Thanks for all your emails and comments so far, it is really much appreciated.
Posted by Andrea Fonseka at 12:19 PM

Lol! Thanks luv. Much appreciated.

Hey, taking taxis and buses aint bad after all eh? =)

I was pumpin gas at the kiosk today and a cover of FHM Sin caught my eye…usually I can’t be bothered as FHM mags are strewn all over the office...

Anyway just a qick note to complement you on one of the best covers I have ever seen! You look sensational…bikini-ed or not.

hi andrea - you're definitely the hottest fhm cover girl i've seen in a long while - its nice to know you're out there slogging for a university degree as well!